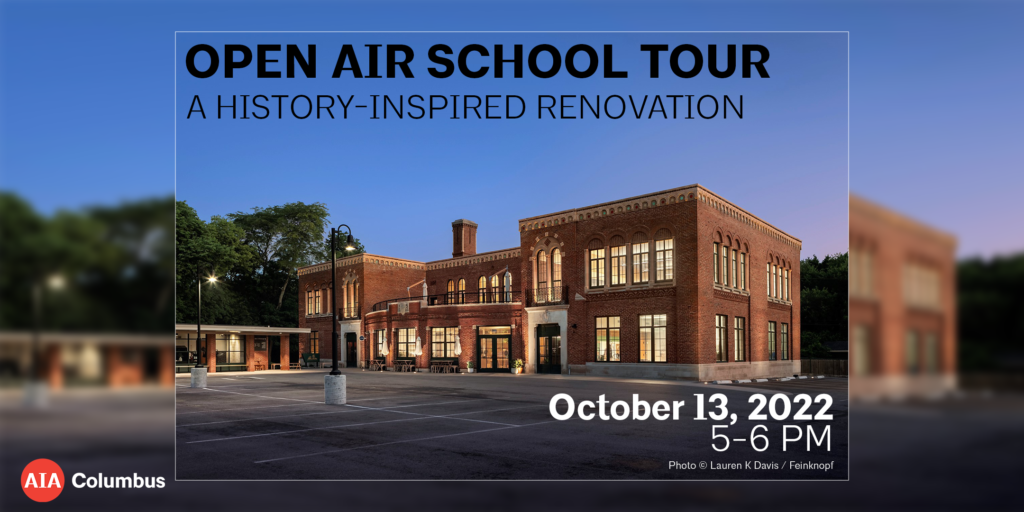 Join us for a tour of the renovated Open Air School building October 13!  Presented by the Committee on Design.

Open Air Columbus is an example of a thoughtful and history-inspired renovation of a highly significant school building. Built in 1928 and designed by Columbus City Schools Chief Architect, Howard Dwight Smith, Open Air is an important example of an early 20th century effort to provide an educational and healthful setting for the prevention of tuberculosis in the most vulnerable children of the day. The open-air concept was intentional, and the school provided a natural setting, outdoor play areas, a large “rest room” for daily naps, a kitchen and cafeteria, and classrooms with abundant windows that stayed open all year. Despite its importance, the school was closed for many years before being bought by the Kelley Companies in 2018. The early 20th century building and its mid-20th century addition have been turned into a popular mixed-use project that houses Emmett’s Café, Understory Bar and Lounge, special event space and a pottery studio. The project preserved the character of the building; established a strong connection to the Olentangy Trail; created vibrant outdoor terraces; and has become an important destination in the north campus neighborhood.

The architect for the project is Schooley Caldwell.

Attendees are invited to a happy hour following the tour.