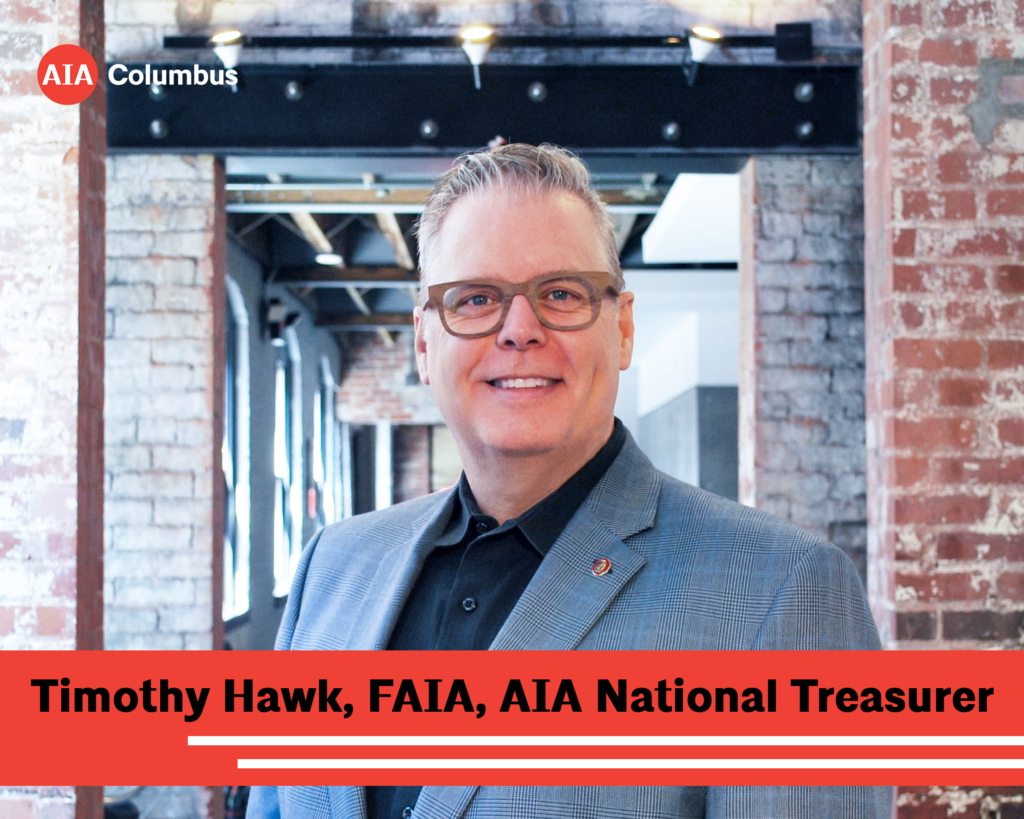 Timothy Hawk, FAIA has been elected Treasurer of AIA!  AIA Columbus would like to congratulate Tim and all the individuals elected to new positions on the AIA Board of Directors.

“AIA Columbus is thrilled to announce that Tim Hawk, FAIA will be serving as the Treasurer for AIA for 2022.  He has pledged to increase transparency and leverage financial resources to expand AIA’s influence and to advance its vision.  Please join me in congratulating Tim on this major accomplishment!”

Timothy Hawk is the President of WSA Studio in Columbus, Ohio. The firm’s work features urban interventions, significant interior environments, and iconic built form.
Hawk’s design portfolio includes corporate and institutional facilities for The McGraw-Hill Companies, Limited Brands, Motorists Insurance, Grange Insurance, The Ohio State University, and Ohio University. He has also been a tireless advocate for the renovation and adaptation of historic structures throughout Ohio.
Hawk attended The Ohio State University in Columbus, Ohio, earning both his Bachelor of Science in Architecture and Master of Architecture. While at Ohio State, he began his twenty-five-year leadership role in the education of architecture students. He has taught at the University of Illinois at Chicago, The Ohio State University and is currently an adjunct professor of architecture at Columbus State.
Hawk has been an active AIA leader on the local and national level. He was President of AIA Columbus (2009-2010), the Chair of the AIA National Advisory Group on Interior Architecture (2006-2009) and the AIA Columbus Honor Awards Committee Chair (2002-2005). As a community leader, Hawk has served as the President of the OSU Knowlton School of Architecture Alumni Society (2010-2011), the founding member of the Columbus Center for Architecture and Foundation Board Member (2010-2011), and is a member of the Communications Committee for the Mid-Ohio Regional Planning Commission’s Insight 2050 Task Force (2015-2016).  He is currently serving as an At-Large Director on the AIA Board.

To learn more about the AIA Board of Directors elections, click here.