This tour is sold out but you can join the waitlist and you will be contacted if a spot opens up. 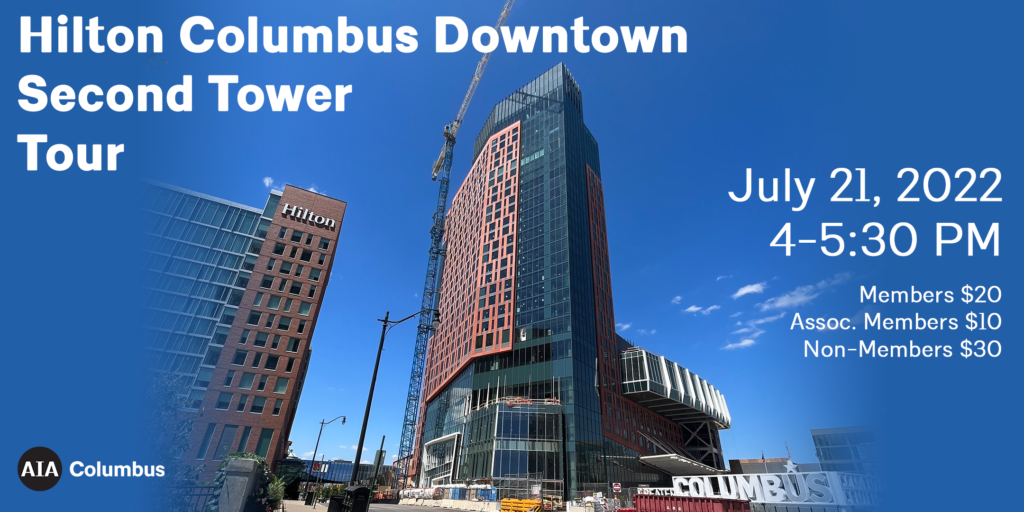 The Columbus Hilton Downtown Expansion project is an addition and expansion to the existing Hilton Downtown located on North High Street at the Columbus Convention Center.  The site is located at the northeast corner of North High Street and Ohio Center Way, directly adjacent to the Greater Columbus Convention Center and across N. High Street from the existing Hilton Hotel. The total gross square footage of the expansion is approximately 460,000 SF over 28 total stories.  This will operate as Ohio’s first 1,000 room hotel; providing an additional 463 hotel rooms and an additional 47,000 SF of meeting space to the existing facility, a green roof and 150 pieces of original art by Central Ohio artists.  In addition, the expansion will provide multiple signature food and beverage destinations, including a two story signature restaurant located on N. High Street and a Rooftop Bar which will feature panoramic views of Columbus.

The striking shape of the building is a direct result of the fact that it sits on a triangular parcel of land in between railroad tracks and the convention center, just across the street from the existing Hilton hotel which opened in 2012.  Scale was carefully considered to make the old and new hotels appear as one destination with a single point of entry, while straddling the elevated High Street. The exterior façade design is a composition of floor to floor curtain wall and architectural precast concrete.  The expansion has been designed to relate to and complement the existing building as a contemporary counterpart, while also reacting to the Convention Center’s unique and iconic form.  It has been a goal of the team that the total Hilton complex reads and functions as one property, once complete.  The design captures the vision for the final Hilton complex as an energetic and signature destination for both visitors and residences of Columbus.

Cooper Carry is the prime architect in collaboration with Columbus-based Meyers + Associates Architecture.

PPE is required for all attendees including hard hat, safety vest, safety glasses, gloves, and protective closed toe footwear (boots/hard shoes preferred, no gym shoes, heels, or sandals).  Attendees must bring their own PPE, it will not be provided.

Additional details and parking information will be sent closer to the tour.