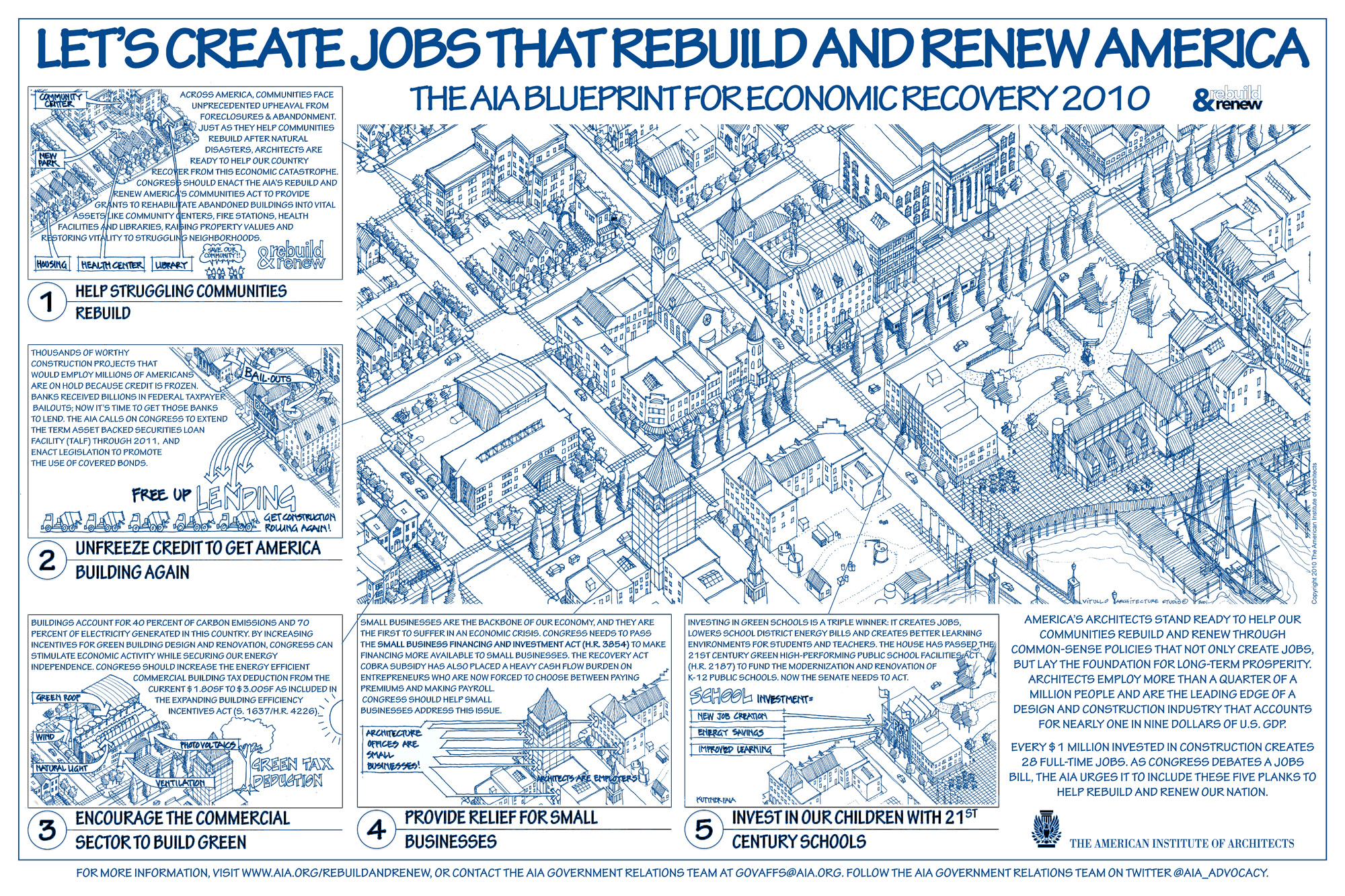 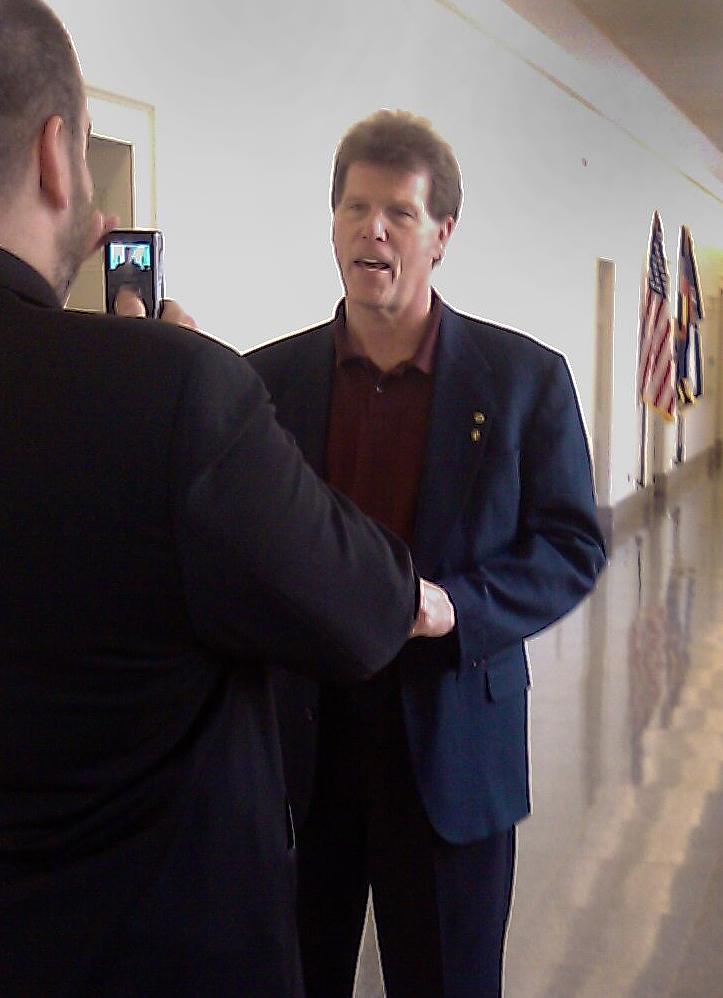 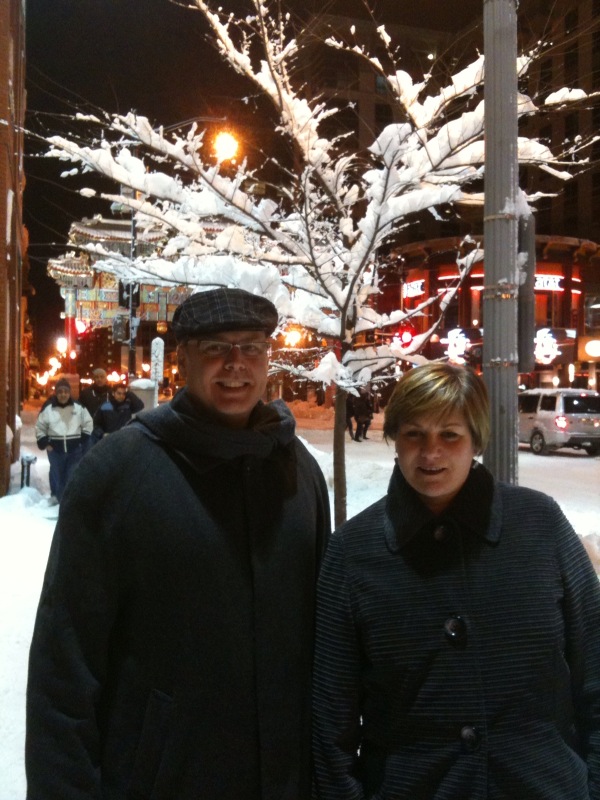 Peter Macrae, AIA, being interviewed        Timothy Hawk, AIA and Gwen Berlekamp
by Adam Mellis from the National            enjoying Snowmaggedon.
AIA in the halls of the House Canon
Building. 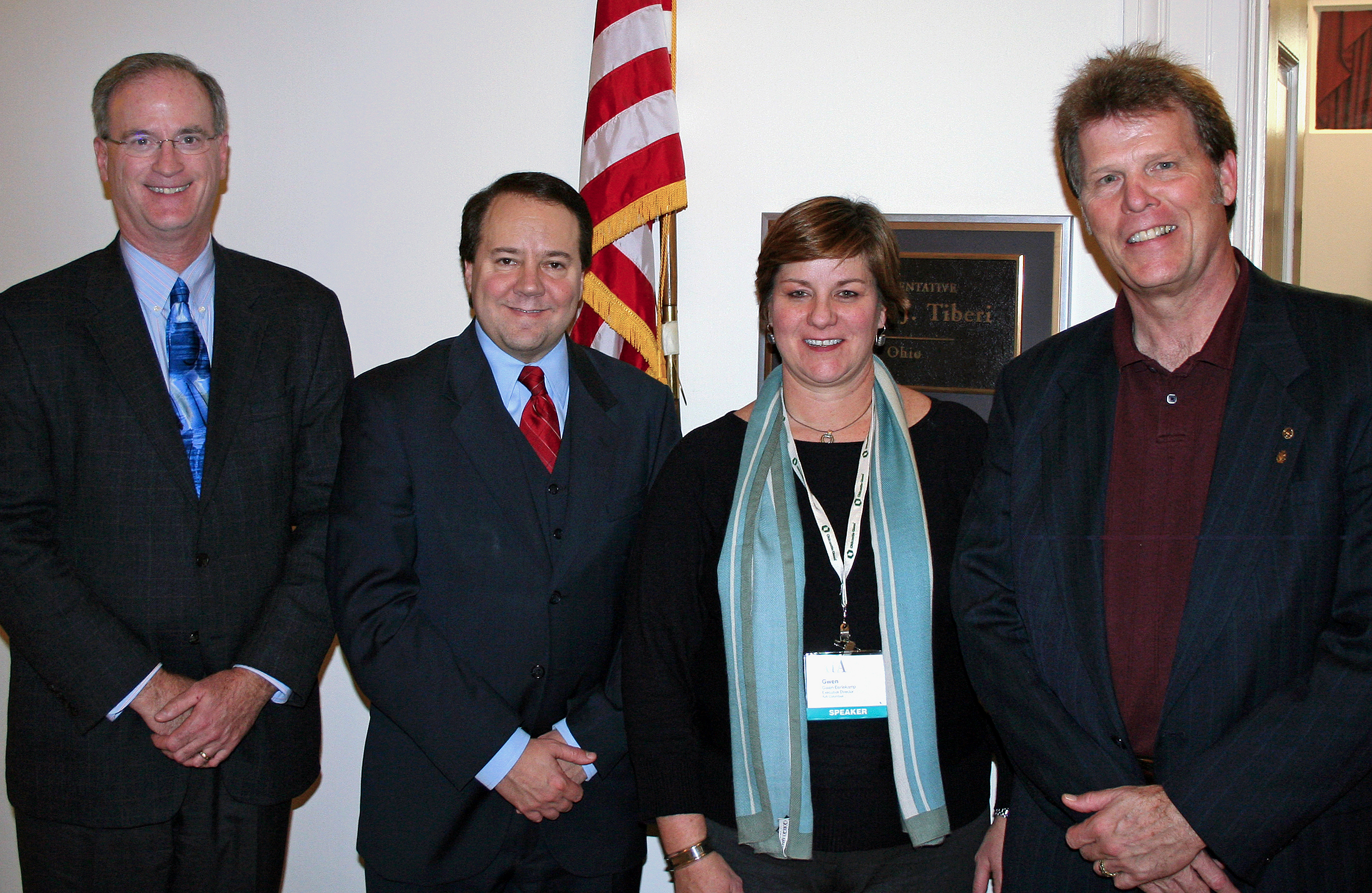 AIA National’s annual February Grassroots event has come and gone for this year. I thought you might like to hear the impressions of those participants who attended from our Chapter. I’ll start and you can read the impressions of the others in their individual contributions below:

Peter Macrae, 2010 AIA Columbus Chapter President
The highlight event of National Grassroots is always the trip to Capitol Hill to meet with the Senators and Representatives of the individual AIA Components from around the country. Both Sandy and Ruth speak of their experience on the Hill below…I want to lift up the “Blueprint for Economic Recovery” that was given to each team to leave with each of their legislators. The overall headline banner read, “LET’S CREATE JOBS THAT REBUILD AND RENEW AMERICA” accompanied by 5 talking points with beautiful, hand sketched, axonometric illustrations (presented on a  representation of an actual blueprint that was rolled-up to be laid out on the table in the meeting…then left behind…suitable for framing). The presentation piece was a huge hit…the 5 points, as culled from the AIA national web site, are as follows:

–Help struggling communities rebuild through the already-funded programs such as the Community Development Block Grant (CDBG) program. “This isn’t your grandfather’s WPA,” said AIA Senior Director for Federal Relations, Andrew Goldberg, Assoc. AIA. “Rather, it’s a simple but effective plan to rebuild communities. What we propose is a New Deal for the 21st century.”

–Unfreeze credit. The AIA says that millions of dollars of construction projects are languishing because lenders are not lending. “The bank wants 50% up front,” said one AIA member attending Grassroots who preferred anonymity, with a major project ready to go but unable to procure reasonable financing.

-Encourage the  commercial sector to build green; AIA is pushing Congress to expand the Energy Efficient Commercial Building Tax Deduction from the current $1.80 per square foot to $3.00 per square foot.

–Provide relief for small businesses. To help laid-off workers, Congress created a 65% government subsidy to cover the cost of COBRA insurance. Employers pay this up front and apply for reimbursement through a payroll tax credit. For small businesses, this can create a cash-flow problem that potentially can lead to more layoffs. Timothy Lemons, AIA, a principal with L2 Studios, an architecture and interior design firm in Orlando, FL, says the COBRA requirement is “really a burden” for a small business such as his.

–Invest in K-12 schools. The AIA is asking Congress to pass legislation that would provide funding to local school districts to renovate and modernize K-12 public schools. “A lot of schools pay more in energy costs than they spend to educate children,” said Grassroots attendee Michael D. Lingerfelt, AIA, owner of a firm in Orlando, FL. “That’s a travesty.”

Timothy Hawk, Immediate Past President of AIA Columbus, and Past Chair of the Interior Architecture Knowledge Community Advisory Group
Grassroots 2010 focused on the evolving role of the architect in a new economy. The national organization is desperately trying to re-align their structure to support deeper discussion regarding the true role of the architect. There is a rich recognition that our professional contribution goes well beyond traditional design activities, and that our membership is now of greater diversity. The most interesting statistic that I heard was from our friend Adam Palmer, AIA of Indianapolis who is the Vice Chair of the Young Architects Forum. Adam shared with Gwen and me that nearly 40% of our membership nationally in AIA is either an associate or a young architect (anyone who has been registered less than ten years). An amazing statistic. The keynote presentation on Friday was shared by Dr. Richard Farson of the Western Behavioral Institute who lauded the profession with great praise. Dr. Farson’s presentation featured a discussion about the significant role that architects play in solving social issues that plague our society. Most interesting was a direct quote which underscores the need to embrace new practice models and methodologies: “Anyone who is working at what they were trained to do is probably obsolete.”

Ruth Gless, President-Elect of AIA Columbus
Grassroots sends the Presidents-Elect to visit their Senators, so our group was made up of all the PE’s from Ohio including AIA Ohio. We had ten, including Kate Brunswick (AIA Ohio), and we met with a staffer from each of our Senators’ offices. With Sherrod Brown’s aide, we met in the hall – apparently this happens often. Bruce Sekanik, AIA Ohio President, was our spokesperson, assisted by some of us, and the issues outlined on the Blueprint were well presented. This year, the message resonated; especially telling is the connection between unemployment in our industry and the whole construction industry. We worked hard to point out that we are the leading edge of a bigger problem challenging recovery for the country. General impressions: I would say that ten folks visiting one office are too many; some of us could have helped out those visiting on the House side. The office space is much more generous and the office furniture more comfortable for the staff of the Senate side. There is a steady stream of visitors to all these people. It is a wonder if they get anything substantive done. There is a lot they don’t know – they each have a narrow area of expertise – and they are willing to admit it. Should we be worried? Finally – there is a huge Calder in the atrium lobby of the hart Senate Office Building – my group was really interested in its structural support. It was way too big for the space, which makes it look like cardboard. Better to go see the one hanging in the East Wing of the National Gallery – or the ones outside in Chicago.

Sandy Bresler, Treasurer of AIA Columbus
As always one of the focal points of Grassroots is to bring AIA’s message to Capitol Hill and to make heard our voice on issues that are important to our profession and our communities. Peter, Gwen, and I visited the offices of Congress persons representing the areas of the state included in the Columbus Chapter including Mary Jo Kilroy-15th District, Zack Space-18th District, and Pat Tiber-12th District. Staff at all three seemed genuinely interested in listening to the issues presented and had constructive input.

Tiber’s legislative assistant showed the most interest in our issues and was particularly interested in our request to expand the energy efficiency related tax deductions for commercial buildings. Tiberi’s office is currently looking into the possibilities of ways to provide energy tax credits based on energy efficient construction methods and he had pointed questions concerning energy efficient building construction relating to building envelopes. It was refreshing to actually meet, although for the most part in passing, Kilroy and Tiberi. They were both kind enough to take time to listen to what we wanted to present.

Day 1 focused on advocacy and included visits to Capitol Hill to advocate for policies and legislation important to architects. Architects stand ready to help our communities rebuild and renew through policies that not only create jobs, but lay the foundation for long-term prosperity. Architects employ more than a quarter of a million people and are the leading edge of a design and construction industry that accounts for nearly one in nine dollars of the US GDP.

This year we had a handout to leave with our legislators. This visual, “The AIA Blueprint for Economic Recovery,” was a poster-sized blueprint detailing the AIA agenda. For more information on the legislative agenda, visit www.aia.org/rebuildandrenew or follow the AIA Government Relations Team on Twitter @aia_advocacy.

Day 2 focused on professional development workships around knowledge and operations designed to help participants in their leadership roles. Timothy Hawk, AIA and Past Chair of the Interior Architecture Knowledge Community Advisory Group, and myself joined Rick Bell, FAIA and AIA New York City Executive Director, and Mary Burke, AIA and Member, Interior Architecture Knowledge Community Advisory Group, in a session titled: “Putting Geography on the Map: Knowledge Communities and Components Working Together.” The session focused on engaging members at the local level through knowledge-driven committees and programming. Despite the difference in component size, both AIA Columbus and AIA New York have had success in establishing local Knowledge Communities and this session allowed us to share lessons learned with others.

Day 2 (and Days 3 and 4) was highlighted by “Snowmaggedon” in Washington, DC – the record-break snow event that completely shut the city down. While some of us were able to get out before they closed the airport, not all did and thus were stranded for a couple extra days. Seeing how the District handled the snow (or lack thereof) simply proved we really should be proud of the snow removal efforts in our great city.

Maybe by next month’s blog, we will be unburied from the snow…one can only hope.