Free for AIA Members, Affiliates, and Students (with valid ID)
$20.00 for Non-Members 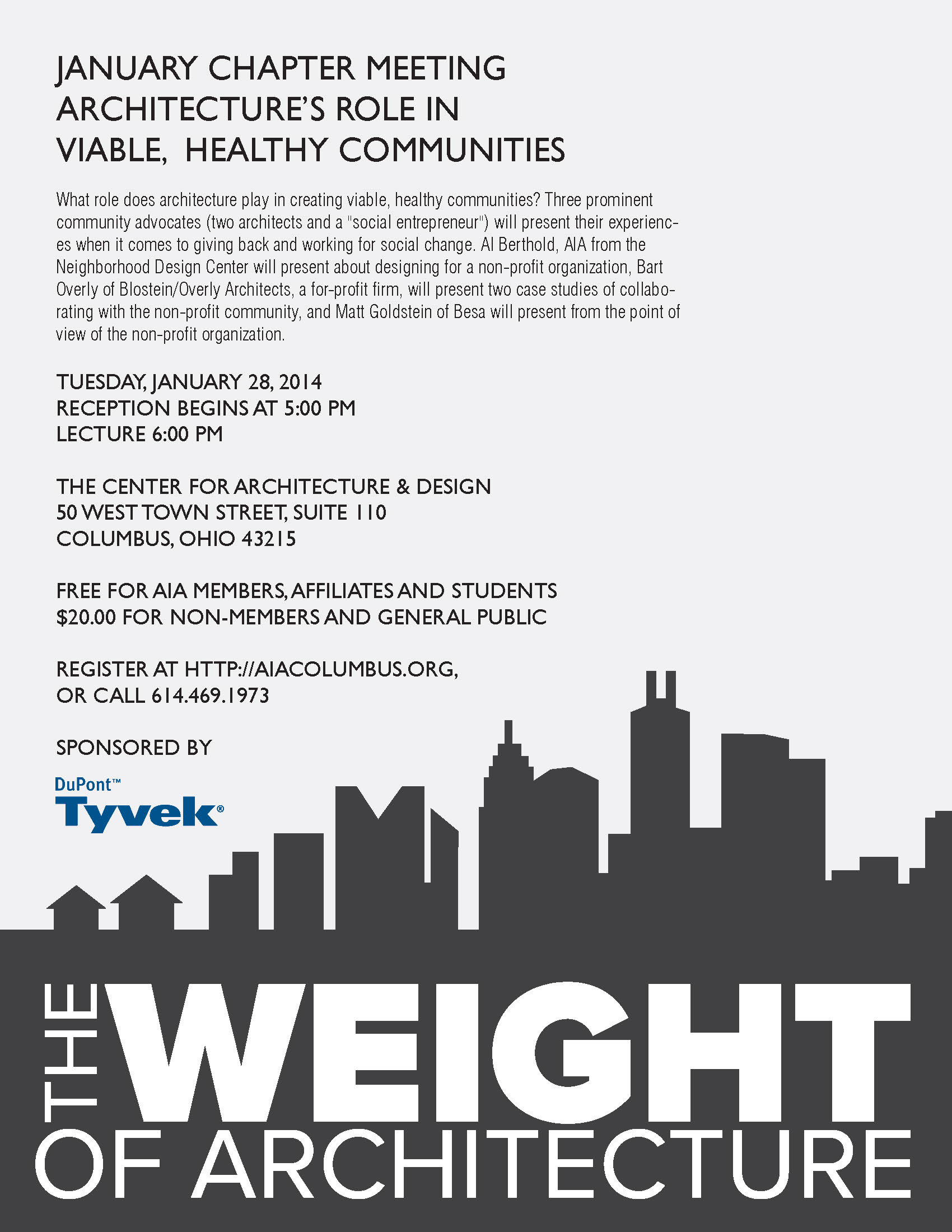 What role does architecture play in creating viable, healthy communities? Three prominent community advocates (two architects and a “social entrepreneur”) will present their experiences when it comes to giving back and working for social change. Al Berthold, AIA from the Neighborhood Design Center will present about designing for a non-profit organization, Bart Overly of Blostein/Overly Architects, a for-profit firm, will present two case studies of collaborating with the non-profit community, and Matt Goldstein of Besa will present from the point of view of the non-profit organization. 1.0 HSW LU

Alfred Berthold, AIA is the Executive Director of the Neighborhood Design Center. Al is a 1968 graduate of The Ohio State University with a Masters of Architecture. He has lived in Columbus since graduation. His undergraduate degree is from Texas Tech University (B. Arch). Al is a licensed architect in Ohio, South Carolina and Georgia and holds a NCARB certificate. He is a member of the AIA and the Victorian Village Commission. He is a past Board President of the Vellore Christian Medical Hospital NYC in Tamil Nado, India. Al is also Chair of the Community Arts Fund for The Columbus Foundation. Al’s career has been in the practice of architecture with Kenneth Bentsen Associates, Schooley Caldwell, NBBJ, and just prior to joining the Neighborhood Design Center he was in private practice as a sole proprietor. His work includes residential/resort, commercial/retail and health care. His projects include condominiums on the South Carolina coast, retail centers in the mid west, a mental health center and a medical office building associated with Nationwide Children’s Hospital in Columbus, Ohio and a vertical expansion of Kosair Children’s Hospital in Louisville, Kentucky. His international work includes projects planned and designed in Mexico, Chile, Taiwan and India. Al’s responsibilities as Executive Director include marketing, project management, fiscal responsibility, and mentoring.

Bart Overly is a partner, with Beth Blostein, of Blostein/Overly Architects and auxiliary faculty member of The Ohio State University’s Knowlton School of Architecture, where he leads design studios focused on potentials for urban transformation in Columbus and elsewhere.

Blostein/Overly Architects has been the recipient of numerous awards for their design and research work. In particular the studio has placed significant attention in the area of innovative housing and urban trends, with winning competitions for new affordable housing in New York City, artist housing in Kansas City’s Crossroads Arts District, and senior housing in San Francisco. The studio’s work has been featured in venues including Cincinnati’s Contemporary Art Center, The Cleveland Institute of Art, The National Building Museum, and has been published widely.

BL/OV’s project, Elderquarters, which focuses attention on new potentials for integrated urban senior housing, is featured in the upcoming edition of BRAKET[at extremes], being published by Actar in spring 2014.

Matthew Goldstein is a social entrepreneur. He is originally from Philadelphia but has called Columbus home for nearly 15 years. In 2012, Matthew launed Besa, a Columbus-based nonprofit that connects busy professionals to community service. To date, Besa has managed over 85 service projects, as well as contributed $59,000 in goods and services and 1,700 volunteer hours, back to the local community.

Matthew is a 2003 graduate of The Ohio State University with degrees in Marketing & Political-Science. He has been recognized as a “Person to Watch” by Columbus Alive and Besa is ranked as a Top 10 Local Nonprofit by ColumbusUnderground. Prior to Besa, Matthew was employed by Abercrombie & Fitch in the Market Research department.