April Chapter Meeting: “Creating Choices and Improving Quality of Life through Repair and Redevelopment: Tools for Columbus and Ohio” 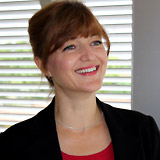 Galina Tachieva is a partner and director of town planning at Duany Plater-Zyberk & Company (DPZ) in Miami, Fla. She is an expert on how to successfully implement urban development in a range of environments, from downtowns to suburban retrofits and resorts. With more than 15 years experience in design and implementation around the world, she shares with her audiences proven strategies for success. Tachieva has led and managed scores of DPZ projects nationally and internationally. Tachieva is the author of the Sprawl Repair Manual (Island Press, July 2010), which presents a comprehensive methodology for transforming sprawl developments into human-scale, sustainable communities. In 2009, Tachieva received the “People’s Choice Award” in the Reburbia Competition sponsored by Dwell and Inhabitat for her “Urban Sprawl Repair Kit.” She has also contributed to a number of publications including The New Civic Art, Architecture and the City International, and The Charrette Handbook.